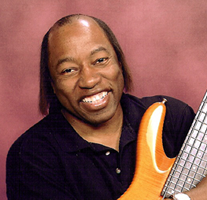 Russell is from New York City, started playing the bass guitar at age 12 and earned a Bachelors of Arts in Music from Central University New York

In 2009, Russell released his first instrumental solo album entitled LS 5. Russell has taught bass lessons privately since 1994 and has been the primary bass instructor at Pfluger-Rock School of Music since it opened in 2000.